So, Dave and I are driving down Yamato towards 95, headed toward the Registry for my new Florida driver’s license (except oddly, it’s the Tax Collector who issues licenses here?!)  Though we shouldn’t be, we’re always surprised to see the Boca “Crash Investigation” cop cars pass by, lights flashing, on the way to yet another fender-bender.  This time, two separate cop cars for two separate accidents up ahead of us.  Stats have to show that this place has the highest accident rate in the US.  People just bump each other. For some reason. 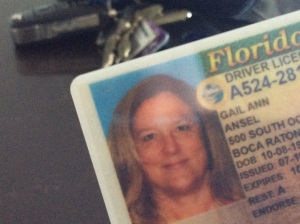 We sneak past the crashes onto the highway, and arrive at the Tax office in time for my scheduled appointment.  The place is wall-to-wall applicants, no shortage of people on walkers.  Yes, walkers!  One of the employees is speaking rather loudly to a frail bent-in-half ancient gent in line, “you have three chances, sir.  You failed the first time.  You have two more chances. Sir.”  As my number is called, the gent slowly shuffles out behind his walker and uniformed nurse’s aide.  Light dawns, see paragraph 1….

My Florida license is issued in less than 5 minutes and we’re on our way, passing gent and aide on the sidewalk outside, still headed toward his car.  Picture bending to tie your shoelaces and you’ve pictured his posture.

Back on 95, approaching the Palmetto exit, traffic slowing (uh…another accident?) we’re lucky to get off.  Except…two MORE Boca cop cars, sirens blazing, are now in front of us, screeching to a halt, blocking a black Infiniti with blackened windows, and thusly, us and all of the traffic behind us.  Then…a third Boca police car pulls off the highway to our left and drives across the grass median strip, tires churning clumps of green behind him, and our mouths dropped open, we see a Boca police “Supervisor” emblazoned SUV screech up onto the exit ramp, and turn to block the road completely.  Right smack dab in front of us.  At which point I back up as far as possible (which is only about a foot.)  The police officers leap out of their vehicles, semi-automatic weapons drawn!

I’m saying to David, “uh, should we film this with our phones?!” but we’re both completely freaked out and figure we’d best just sit still and not move.

The driver of the Infiniti is now out of his car, arms in the air.  A cop is shining her flashlight through his darkened windows, gun drawn.  I’m trying to figure out if the Audi’s windshield will withstand gun-fire.

Then just as suddenly as he was forced at gun-point out of his car on the Palmetto off-ramp, the driver is smiling, waving, and getting back in his car.  The cops re-holster the weapons.  The SUV driver motions “one minute” to me (to which I say, “uh, yup, no problem, take all the time you want.”)  And then, we’re waved forward, staring at the smiling driver sharing a laugh with the cop as we creep by.

So, as I contemplate the start of our drive across the southern United States, and the still-existing major differences between our liberal Northeast life and this here Southern culture, I see this little one hour experience as a bit of a pause:  I’ll stay calm, I’ll stay humble and unobtrusively white middle-aged. And drive really, really carefully!