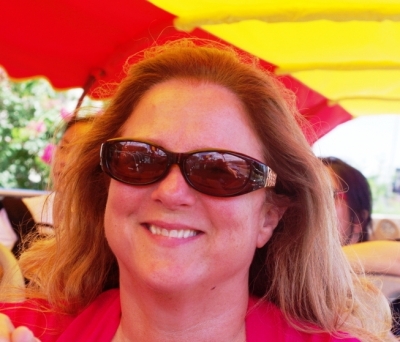 Gail Ansel is a graduate of Brandeis University and the Stanford University Novel Writing Certificate Program, where she was mentored by Joshua Mohr. She is a member of the Castro Writer’s Coop in San Francisco.

She is a Lit Camp alumnus, and winner of the Mendocino County Writer’s Conference 2019 Short Story Scholarship, as well as a finalist in the 2018 Mendocino Novel Contest.

Gail met David her freshman year of high school while doing his makeup for Tartuffe.  After earning a degree in Theater from Brandeis, she pursued acting in Los Angeles, New York, and Boston while David completed his Developmental-Behavioral Pediatrics training.  Together, they founded his private Pediatrics practice, specializing in children with special health care needs.

In addition to performing CFO duties, she coordinated complex patient services and formed close relationships with families.  She implemented a “Medical Home”, managed an integrated Behavioral Services initiative, sat on the Board of a local High School, and a Boston Children’s Hospital Physician Organization committee for management of pediatric primary care.  She was instrumental in the business and financial inclusion of Pediatric Nurse Practitioners in the ownership of the practice, the first in Massachusetts.  After twenty-five years of explosive growth, she assisted in the sale of the practice.

Gail and David relocated from Massachusetts to California in 2015, where David joined the faculty at Stanford University School of Medicine and Gail writes.  They celebrate decades of marriage and have two grown children. Jason earned his PhD at MIT and is married to Mangpo, who earned her PhD at Berkeley.  They work in Tech in the SF Bay Area. Elise has been a wilderness skills teacher and mentor for children in the Amherst, MA area, and is studying Environmental Science.